I’ve flipped through enough old publications that I have learned to look forward with great anticipation to the centerfold. These big, flashy ads are almost always stunning.

At $1475 ($31,300 if you adjust for inflation), the Overland was a pretty pricy item for its day. But that bought you a 45 horsepower motor. That’s about a third of the average passenger car today. 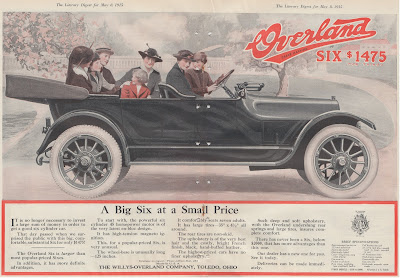 Interesting too to note the mode of dress of the people involved. The women dressed dark and plain with the only color coming from the small girl in the middle. The car seats seven, though I can’t speak for how comfortable anyone would have been.

One thing that I absolutely adore about WordPress is that I can throw out a rather half-hearted entry like the one above and somebody will come along within 10 minutes and ask a great question that forces me to actually THINK about what I just posted. Doug Payne asked: “Have an opinion on the significance of the color in the ad?” It seemed a good enough question that I thought it worth putting my random speculation into the body of the post.

You ask a great question that I hadn’t thought about (I’ll admit that my theme on this blog is consistent but my level of analysis really isn’t.)

If I had to guess…. I’ve looked at a LOT Of auto ads from this time period and the reason I hadn’t bothered to scan more is that they’re all really REALLY similar. There just isn’t the variety of designs that we enjoy today and the only thing to differentiate between them is the stats and the price point. So the color, I would speculate, draws attention to the only two things that would really matter to the affluent reader of this magazine. (The Literary Digest is aimed at a much more affluent crowd) It’s cheaper and bigger than the competition. The other colors are kept muted so help draw attention to the aforementioned items. Our central focal point is the girl in the middle in red and she’s clearly portrayed as having a grand time. But that’s just my speculation on the topic. I’d love to hear others!