Greetings!  Today’s blast from the past comes to us courtesy of Popular Science in the early 70s.  It’s interesting to me to see what the ads in a publication say about the people who read it.  In this case, it’s clear that the subscribers are all of the male gender. Very male. Almost impossibly male. And they like to smoke and drink beer and drive stuff. And do things! Manly things!

As a general rule, I don’t post ads for cigarettes but this one really struck my eye. For the man who likes to smoke and doesn’t mind an 8-step process to put his smokes together I give you Laredo filter blend. It comes with a handy plastic cigarette-making machine and the pricing works out to about $.20 per pack. That’s about $1 in today’s money adjusted for inflation.

What continues to strike me about Jeep ads even from ages ago is that they haven’t changed one iota. Not a bit. This one is blasted 40 years old and it reads like an ad from today. It’s a vehicle with guts and with the same ad guys it had in the 70s.

PopSci was also rife with ads for career improvement. Apparently readers fancied themselves clever enough to move up in the world but they just lacked the training. La Salle Extension university offers everything from a High School diploma to diesel mechanics all from the comfort of your home. I’m amused that they have -one- class in computer programming and it’s just ‘basic training.’ The gals get a separate set of options all the way to the right. No female diesel mechanics in these days, I guess. They could be accountants or dental assistants or secretaries.

Not looking to be an accountant or clean teeth? How about the Cleveland Institute of Electronics? Tell off your boss today! Learn how in handy comic-book form!

Circuits not your cup of tea? Well heck. Just join the Army. There’s just no satisfying some people!

Switching gears dramatically, the car ads of course made themselves known as they always do. Those readers who already have a job will need a way to get there. Why not try the Ford Pinto? It boasts 25 mpg and a 75 HP motor. Based on the ad text it’s really trying to compete with the VW bug to which it compares itself and based on the ad photo a half-eaten apple is better than a bug any day.

Forget the Pinto though, you should hear what they’re saying about the Chevy Vega!

Feeling like a car is too much responsibility? How about the Yamaha 650 XS-1B?

Is even a motorcycle too much responsibility? Prefer to motor manfully over the snow or sand dunes rather than the city streets? Try the Honda All-Terrain Cycle. Sure it looks like something Bozo the Clown would ride but that’s OK. It takes on those sand dunes like a champ and doesn’t require a driver’s license in the event you somehow got enough DUIs to lose it back in 1971.

And when you’re done finding a job and driving around all day has left you thirsty, kick back and relax with a Schlitz. Because nothing tastes more like Schlitz than a Schlitz.

Greetings! As a possibly permanent change of pace, I’ve decided to take a single issue of a periodical of the dim and misty past and have at it all in one go. Today’s lucky target of nostalgia is the September 27th 1954 edition of Sports Illustrated. That was the first year for this noble magazine veteran and this was lucky issue #7. Let’s dive in and look at the interesting part, the adverts, and ignore all that pesky content about sports!

It’s easy in today’s bare-headed culture to forget that 50 years ago hats were pretty damn important and a part of every smart-looking young man’s wardrobe. This smart green Black Forest hat has a band as wide as a weasel’s face. No doubt that was the height of fashion at the time. These suckers top out at $20 in 1954. Accounting for inflation that’s a $150 hat! That’s one salty weasel-band hat!

This ad admonishes us to ask for genuine G.E. tubes the next time we have our televisions repaired. Do they even HAVE TV repairmen anymore? Regardless, if they do then I hope they use G.E. tubes. They really put a wallop in your tired TV picture. When’s the last time you walloped something?

These people are obviously of the monied class so of course they arrived at this fancy dinner in a Cadillac. You’d have to have a lot of money to drive a car the size of a commercial fishing vessel. Bubba-Gump’s shrimpin’ boat was smaller than this car. Her jewels by Van Cleef and Arpela. Wrap by Anthony Biotta. Car by Cadillac. All 22 feet of it.

Old Spice – For Men. As if you had to make THAT clear. Any woman who would consider wearing Old Spice probably drives a shrimpin’ boat and gives not a whit of a care about how she smells.

Ending on a supremely manly note, Early Times is every ounce a Man’s Whisky. These people know about horses so they must know about good whisky, right? Though one must admit that with that rather pallid yellow color one can’t help but wonder if the whisky doesn’t start out as a byproduct of the horse…

And that’s what advertising was like in 1954. Anybody wanting a 1954 copy of SI can have it at cost now that I’m done with it.

Before there was Bud-Weis-er…. 1981 Budweiser

Before there were talking frogs, there were pull-tab cans. The current slogan of “this bud’s for you” appears in the newspaper on the right-hand side of the street. 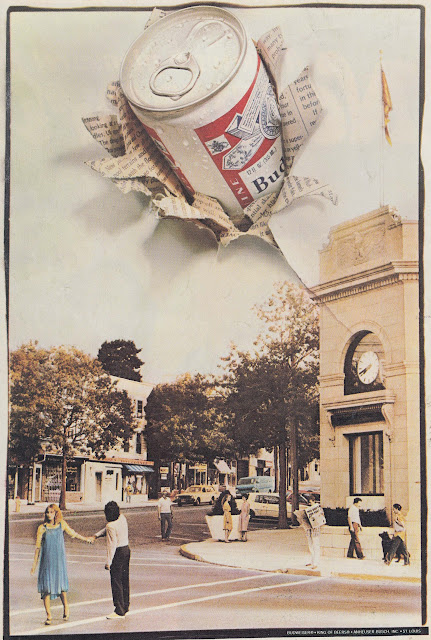 Except for the obsolete can-opening mechanism the ad is fairly unremarkable except for the reaction of the gentleman in the foreground. His lady friend is leading him across the street but he’s become distracted by the giant beer in the sky. She clearly couldn’t care less but he is enthralled. Is the advertising trying to tell us that beer is more important than a relationship with a woman in a blue velour dress? Well, maybe. Well… velour? Very probably.

The Pause the Refreshes while Shopping – 1936 Coca Cola

There’s certainly no fear of gender stereotypes here. These gals are decked out in the absolute latest fashions as they’re out shopping in fur coat and jaunty cap.  Luckily for these thirsty shoppers Coke is available “just around the corner from anywhere” for just five cents! 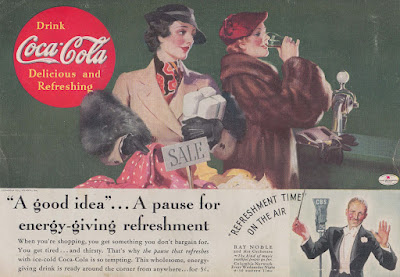 And when you get home, Ray Noble and his orchestra play “the kind of music that youthful people go for” at 9:30 eastern on the Columbia Network. When’s the last time you saw a print ad for a radio program? That Ray Noble is really decked out to the nines. With that little baton you can bet that they’re going to be playing some real swingin’ tunes! 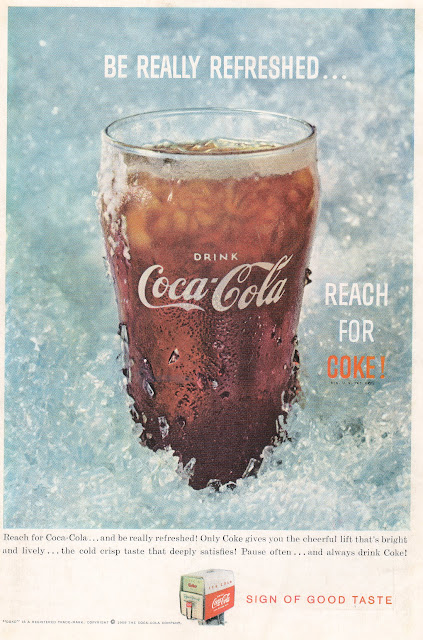 The year is 1941 and the world is at war. Meanwhile, this fancy Press Agent in a smooth hat and suit is enjoying a tiny glass of coke. Perhaps he’s a giant. 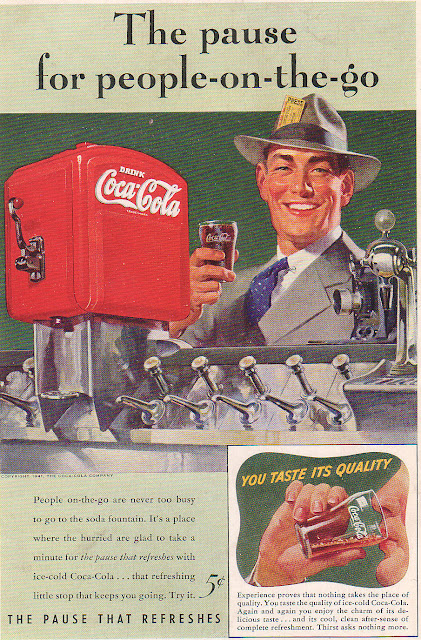 
People on-the-go are never too busy to go to the soda fountain. It’s a place where the hurried are glad to take a minute the pause that refreshes with ice-cold Coca-Cola… that refreshing little stop that keeps you going. Try it. 5c

You taste its quality
Experience proves that nothing takes the place of quality. You taste the quality of ice-cold Coca-Cola. Again and again you enjoy the charm of its delicious taste… and its cool, clean after-sense of complete refreshment. Thirst asks nothing more.

Now we’re told that we’re not too busy to go for a soda. What does this ad make you think of? Would you buy this product? Would you date this guy in the hat?

First of all, it’s not THAT George Washington. This George Washington was a Belgian inventor holding patents for a few dozen products including instant coffee. His company was created in 1910 and the brand lasted until 1961 when it was discontinued. 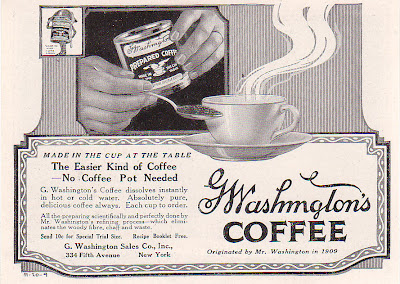 Made in the cup at the table
The Easier kind of Coffee – No Coffee Pot Needed
G. Washington’s coffee dissolves instantly in hot or cold water. Absolutely pure, delicious coffee always. Each cup to order.

All the preparing scientifically and perfectly done by Mr. Washington’s refining process – which eliminates the woody fibre, chaff and waste.

Admittedly, the need to state that there’s no woody fibre or waste in the coffee gets my attention. Food and beverage quality fail 90 years ago.

Looking at this ad you can sure tell just how close we are to the 70s. Fashions of the day were… especially unfashionable. Note the all-denim on the left and the sea of spandex and generally stretchy stuff everywhere else. The moose, however, is ludicrously fashionable in those spiffy sunglasses. 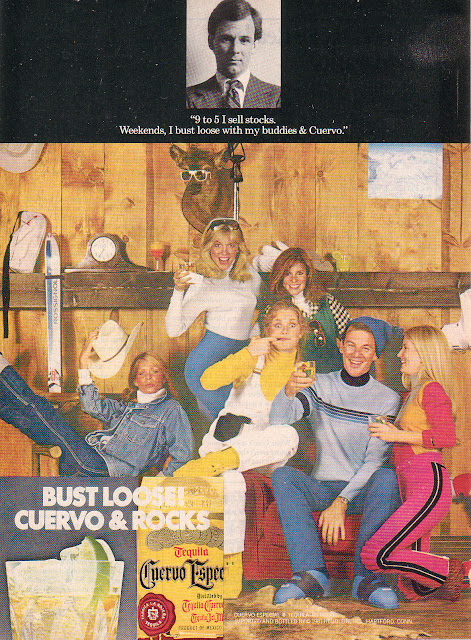 9 to 5 I sell stocks. Weekends, I bust loose with my buddies & Cuervo

We are intended to believe, I presume, that these motley-dressed people are professionals of some sort. I’m certainly hopeful that I never become unlucky enough to invest with someone who has such poor taste in clothing.

You can tell a lot about how a society wants to see itself by its advertising. Clearly, in 1959 we were all just idiotically happy eating our sandwiches and drinking our sodas. I’d be absolutely astonished if the girl in this picture actually finished that huge meal though and the drive-in is very trusting to be handing out glass salt and pepper shakers to every car. 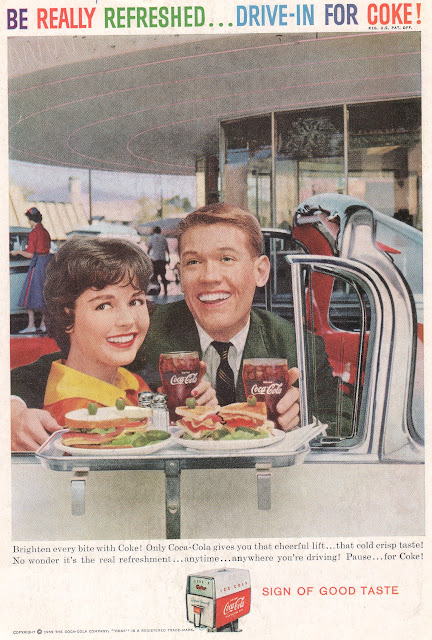 Brighten every bite with Coke! Only Coca-Cola gives you that cheerful lift… that cold crisp taste! No wonder it’s the real refreshment… anytime… anywhere you’re driving! Pause… for Coke!