A collection of adverts from 1965

1965 Dr. Pepper. Does anyone remember drinking Dr. Pepper as a hot drink?

1965 Chesterfield King Cigarettes. They satisfy! Especially for those who hate those pesky filters filtering out deadly toxins. More toxins please!

1965 Condatina tomato sauce coupon. By today’s standards, 6-cents is nothing but back then it was nothing to sneeze at.

1965 Schlitz Beer. This is obviously a dude who doesn’t have to clean his own floors.

1965 Tampax. Feminine Hygiene has always been a mystery to me but it much less perplexing than the advertising for it.

1965 Volkswagon. Must admit, I’d love to putter around in one of these. Even if they are deathtraps

The year is 1967. Food is in short supply so humans have turned to making Jell-o from human vomit. And I used to think there was NO way to mess up a green olive. *pout*

It’s hard to imagine, I suspect, a time when you couldn’t just wave a bit of plastic at Wal-Mart and they’d give you anything in the store.  This 1973 ad for Master Charge is a relic of a by-gone era… 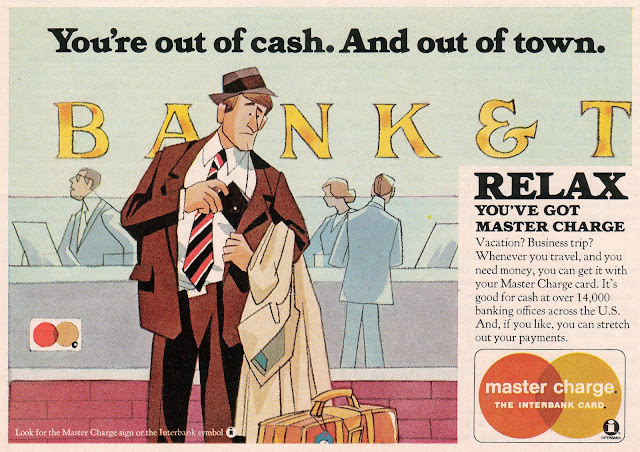 Relax – You’ve got Master Charge
Vacation? Business trip? Whenever you travel, and you need money, you can get it with your Master Charge card. it’s good for cash at over 14,000 banking offices across the U.S. And, if you like, you can stretch out your payments.

It’s amazing to think that today there are probably 14,000 places in Indiana alone that will take my Visa card.  What a long way we’ve come in almost 40 years.  OK.  Fine.  It’s not all that impressive progress… but it is progress… or IS it….?

A Guide to this Blog…

So the first thing to know about this blog is that it’s not actually one blog but, in fact, three blogs.  I tend to go on sporadic tears on all sorts of random topics and I’ve often said that I pick up interests and hobbies in the same way that other people pick up loose change on the street.  So over the years I’ve puttered around with a lot of different things and as such I can’t possibly expect any reasonably sane group of people to actually care about all of them.  From such scattered thinking on my part was born the need for three blogs instead of one.  I want people to be able to get the random crap they want and happily ignore the random crap they do NOT want.

Unlike Google’s Blogger, WordPress – bless its magically helpful heart – allows me to do this rather seamlessly.  In some ways, perhaps a bit too seamlessly as I suspect it confuses people at times.  So, continuing on at what must seem a glacial pace, I give you, the blogs:

So there’s the nickel tour.  I try to make sure a new post is scheduled for each blog at 5pm EST.  Read what you want and ignore what you don’t.  I can’t make it any easier than that.

Looking at this ad you can sure tell just how close we are to the 70s. Fashions of the day were… especially unfashionable. Note the all-denim on the left and the sea of spandex and generally stretchy stuff everywhere else. The moose, however, is ludicrously fashionable in those spiffy sunglasses. 9 to 5 I sell stocks. Weekends, I bust loose with my buddies & Cuervo

We are intended to believe, I presume, that these motley-dressed people are professionals of some sort. I’m certainly hopeful that I never become unlucky enough to invest with someone who has such poor taste in clothing.