It seems somewhat apropos that such a strange little duo would be found selling such a strange-looking device. The camera was simple in that it simply took two pictures at the same time from two viewpoints. When you looked at the photos through the viewer, which just made sure that your left eye got one picture and your right eye the other, then you saw the result as three-dimensional. This concept was almost as old as photography itself but during the 50s entered wider use with cameras like this one costing only(!) $182. Adjusting for inflation this is a $1,500 camera, folks.

Edgar Bergen and Charlie McCarthy are hawking this little device and as I’m sure you ALL remember from the 30s through the mid 50s they were a hilariously popular radio ventriloquist duo. Let me just allow that to sink in a bit. They were ventriloquists… and they were primarily known for “appearing” on the… radio… yes, yes indeed, that ancient device in which you can hear the people doing the show but can’t actually see them so you would never be able to TELL that one half of the conversation was held up by a wooden dummy. It never ceases to amaze me how creepy they both look in print advertising and how redundantly they use jokes of the form “Charlie’s no dummy he uses product X!” But if it worked then so be it.

As much as I love modern photography equipment in all its technological greatness, I still think it would be rather cool to carry about a camera with a bellows. 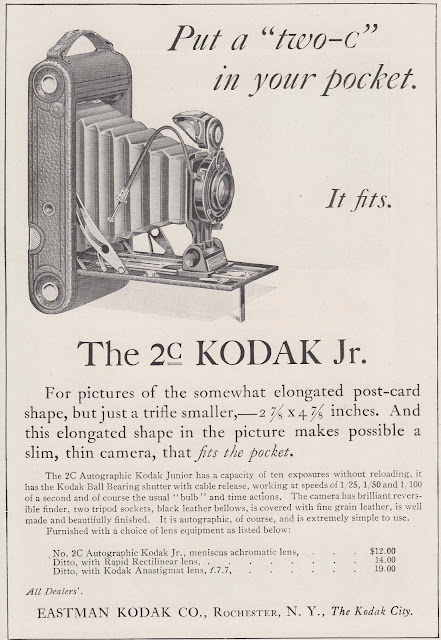