The year is 1967. Food is in short supply so humans have turned to making Jell-o from human vomit. And I used to think there was NO way to mess up a green olive. *pout*

It seems somewhat apropos that such a strange little duo would be found selling such a strange-looking device. The camera was simple in that it simply took two pictures at the same time from two viewpoints. When you looked at the photos through the viewer, which just made sure that your left eye got one picture and your right eye the other, then you saw the result as three-dimensional. This concept was almost as old as photography itself but during the 50s entered wider use with cameras like this one costing only(!) $182. Adjusting for inflation this is a $1,500 camera, folks.

Edgar Bergen and Charlie McCarthy are hawking this little device and as I’m sure you ALL remember from the 30s through the mid 50s they were a hilariously popular radio ventriloquist duo. Let me just allow that to sink in a bit. They were ventriloquists… and they were primarily known for “appearing” on the… radio… yes, yes indeed, that ancient device in which you can hear the people doing the show but can’t actually see them so you would never be able to TELL that one half of the conversation was held up by a wooden dummy. It never ceases to amaze me how creepy they both look in print advertising and how redundantly they use jokes of the form “Charlie’s no dummy he uses product X!” But if it worked then so be it.

Greetings!  Today’s blast from the past comes to us courtesy of Popular Science in the early 70s.  It’s interesting to me to see what the ads in a publication say about the people who read it.  In this case, it’s clear that the subscribers are all of the male gender. Very male. Almost impossibly male. And they like to smoke and drink beer and drive stuff. And do things! Manly things!

As a general rule, I don’t post ads for cigarettes but this one really struck my eye. For the man who likes to smoke and doesn’t mind an 8-step process to put his smokes together I give you Laredo filter blend. It comes with a handy plastic cigarette-making machine and the pricing works out to about $.20 per pack. That’s about $1 in today’s money adjusted for inflation.

What continues to strike me about Jeep ads even from ages ago is that they haven’t changed one iota. Not a bit. This one is blasted 40 years old and it reads like an ad from today. It’s a vehicle with guts and with the same ad guys it had in the 70s.

PopSci was also rife with ads for career improvement. Apparently readers fancied themselves clever enough to move up in the world but they just lacked the training. La Salle Extension university offers everything from a High School diploma to diesel mechanics all from the comfort of your home. I’m amused that they have -one- class in computer programming and it’s just ‘basic training.’ The gals get a separate set of options all the way to the right. No female diesel mechanics in these days, I guess. They could be accountants or dental assistants or secretaries.

Not looking to be an accountant or clean teeth? How about the Cleveland Institute of Electronics? Tell off your boss today! Learn how in handy comic-book form!

Circuits not your cup of tea? Well heck. Just join the Army. There’s just no satisfying some people!

Switching gears dramatically, the car ads of course made themselves known as they always do. Those readers who already have a job will need a way to get there. Why not try the Ford Pinto? It boasts 25 mpg and a 75 HP motor. Based on the ad text it’s really trying to compete with the VW bug to which it compares itself and based on the ad photo a half-eaten apple is better than a bug any day.

Forget the Pinto though, you should hear what they’re saying about the Chevy Vega!

Feeling like a car is too much responsibility? How about the Yamaha 650 XS-1B?

Is even a motorcycle too much responsibility? Prefer to motor manfully over the snow or sand dunes rather than the city streets? Try the Honda All-Terrain Cycle. Sure it looks like something Bozo the Clown would ride but that’s OK. It takes on those sand dunes like a champ and doesn’t require a driver’s license in the event you somehow got enough DUIs to lose it back in 1971.

And when you’re done finding a job and driving around all day has left you thirsty, kick back and relax with a Schlitz. Because nothing tastes more like Schlitz than a Schlitz.

Starlog Magazine – February 1983 or a Nerdgasm of 30 years Past

My general rule for ads is to never bother with any ads younger than I am. As the years pass this becomes a sad and increasingly restrictive rule. Today, however, we revisit the year 1983 and Starlog magazine, a publication devoted to computers, video games and scifi. Let’s skip over the silliness of David Hassellhoff and the Knight 2000, Jon Pertwee’s return to Doctor Who and other random drivel so that we can focus on the best part: The Adverts!

I don’t know about you but I’d give… practically nothing for a Admiral Ackbar full-face latex mask. It’s surprising to me that the instructions specify that customers should send cash in the mail. Also, one wonders how many of these remain Mint-In-Box even today waiting for some lucky kid to crack them open and wear them around the yard… before getting beaten up by a few neighborhood bullies with poor appreciation for nerdy pursuits like “recreating your favorite character’s most adventurous moments” as the text says.

And, just in case the mask didn’t get your ass beat for you, you can order a “Warrior’s Battle Outfit.” These guys really have it in for their customers. The text suggests that “you can wear your Battle Warrior outfit to school, parties or anywhere! It’s fun to dress in space fashion. The whole family can dress in Warrior’s Battle outfits.” Again, anywhere that you want to get your ass thoroughly beaten with your own “Warrior’s Battlepac”

And no 80’s magazine ad would be complete without mention of the Atari game system.
Get ready for the space battle of your life with the award-winning Astro Chase!” Enjoy those “fast-fighting thrills and brilliant graphics!”

Greetings! As a possibly permanent change of pace, I’ve decided to take a single issue of a periodical of the dim and misty past and have at it all in one go. Today’s lucky target of nostalgia is the September 27th 1954 edition of Sports Illustrated. That was the first year for this noble magazine veteran and this was lucky issue #7. Let’s dive in and look at the interesting part, the adverts, and ignore all that pesky content about sports!

It’s easy in today’s bare-headed culture to forget that 50 years ago hats were pretty damn important and a part of every smart-looking young man’s wardrobe. This smart green Black Forest hat has a band as wide as a weasel’s face. No doubt that was the height of fashion at the time. These suckers top out at $20 in 1954. Accounting for inflation that’s a $150 hat! That’s one salty weasel-band hat!

This ad admonishes us to ask for genuine G.E. tubes the next time we have our televisions repaired. Do they even HAVE TV repairmen anymore? Regardless, if they do then I hope they use G.E. tubes. They really put a wallop in your tired TV picture. When’s the last time you walloped something?

These people are obviously of the monied class so of course they arrived at this fancy dinner in a Cadillac. You’d have to have a lot of money to drive a car the size of a commercial fishing vessel. Bubba-Gump’s shrimpin’ boat was smaller than this car. Her jewels by Van Cleef and Arpela. Wrap by Anthony Biotta. Car by Cadillac. All 22 feet of it.

Old Spice – For Men. As if you had to make THAT clear. Any woman who would consider wearing Old Spice probably drives a shrimpin’ boat and gives not a whit of a care about how she smells.

Ending on a supremely manly note, Early Times is every ounce a Man’s Whisky. These people know about horses so they must know about good whisky, right? Though one must admit that with that rather pallid yellow color one can’t help but wonder if the whisky doesn’t start out as a byproduct of the horse…

And that’s what advertising was like in 1954. Anybody wanting a 1954 copy of SI can have it at cost now that I’m done with it.

It’s almost too easy to take pot-shots at seventy’s fashions but I’ll do it anyway. Imagine, if you will, a world in which it’s cool to wear all-denim outfits. Is this what you imagined? 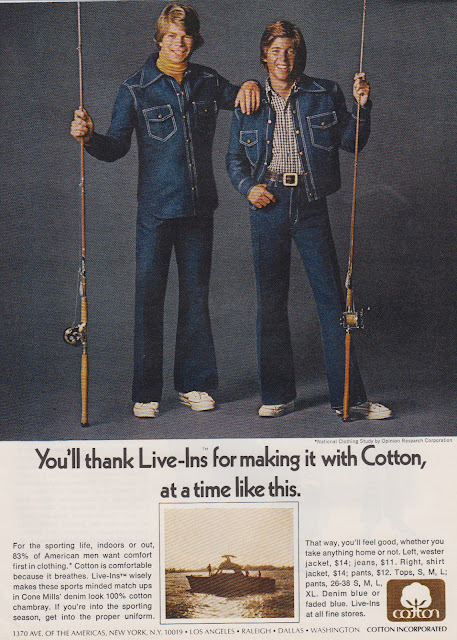 One one hand, I regret that male fashions have become so drab and plastic. On the other hand, I can’t help but think that if THIS is what male self-expression in the area of fashion looks like then maybe we’re better off being drab? 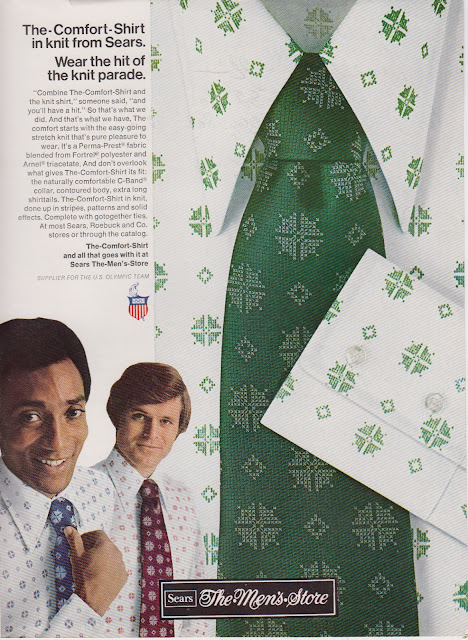 And who approved these color choices? 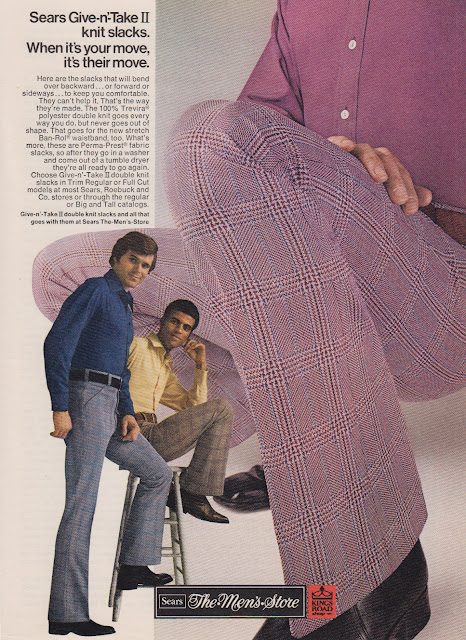 And the shoes are to die for. Or… well, at least you’ll want to die. 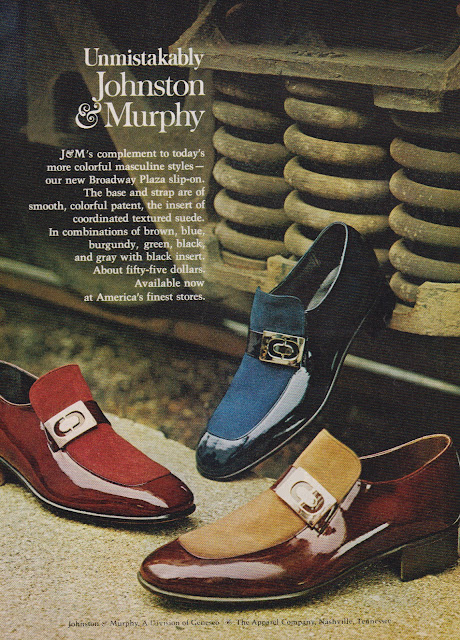 The year is 1934 and based on the text of this ad, a refrigerator is a luxury that some people just haven’t quite gotten around to appreciating yet. “Luxurious convenience every day in the year” the ad promises and now you can safely save leftovers. It even has a foot-pedal door opener, automatic interior lighting and semi-automatic defrosting. You can’t beat that! 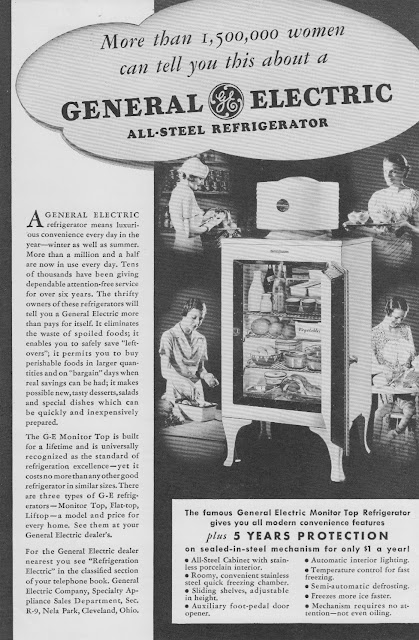 I have to say, those women look PRETTY happy. Maybe we should all buy our wives refrigerators!

’tis true, Rocky Horror didn’t just make it up. In seven short days Charles Atlas (or Angelo Siciliano to his friends) can make you a new man with his “Dynamic Tension” workout system.

Everything I needed to know about exercise I learned from musical theatre.